by Megan Powers
As the youngest of nine children, I’m used to being with large groups of people. Fighting to keep my seat, scraping to get the last bit of food, and hunting for a place to sleep in my parent’s home when visiting are all familiar.

Several years ago, I ventured out on my own in Europe for ten days after traveling with a friend. Before the trip, I was confident that traveling alone would be no problem, but when it came time for my friend to leave? I was terrified.

Despite the fear, what happened next became the best time of my life. That trip shaped the traveler I have become, meeting more people and having experiences I know I wouldn’t have otherwise. I was invigorated after having met so many kind and friendly people who became my friends. Since that adventure, I’ve taken seven international journeys in which part or all were accomplished on my own. 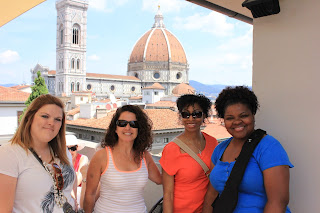 In the midst of a 17-day study abroad program in Italy, I now have 13 new student friends, a roommate, and several instructors with whom I’m spending almost every waking (and non-waking) moment. This is a situation that’s the exact opposite of those eight trips. A busy schedule including planned excursions, class hours, lab work, and meals together are all part of the experience. Needless to say, it’s been an adjustment!

Being surrounded again has not meant regression. I’ve been a global traveler. But this experience of constant contact with my like-minded classmates and immersion in the Italian Cagli community is challenging me to become a world citizen.

I’m no longer scavenging for a place to sleep, but I’m trying to bridge cultural gaps. I won’t give up my solo travel and all of its benefits, but I now have the benefit of having been a part of so much more in this shared experience.
Posted by Megan Powers at 9:54 AM